You are here: Home > See and Do > An Suileachan 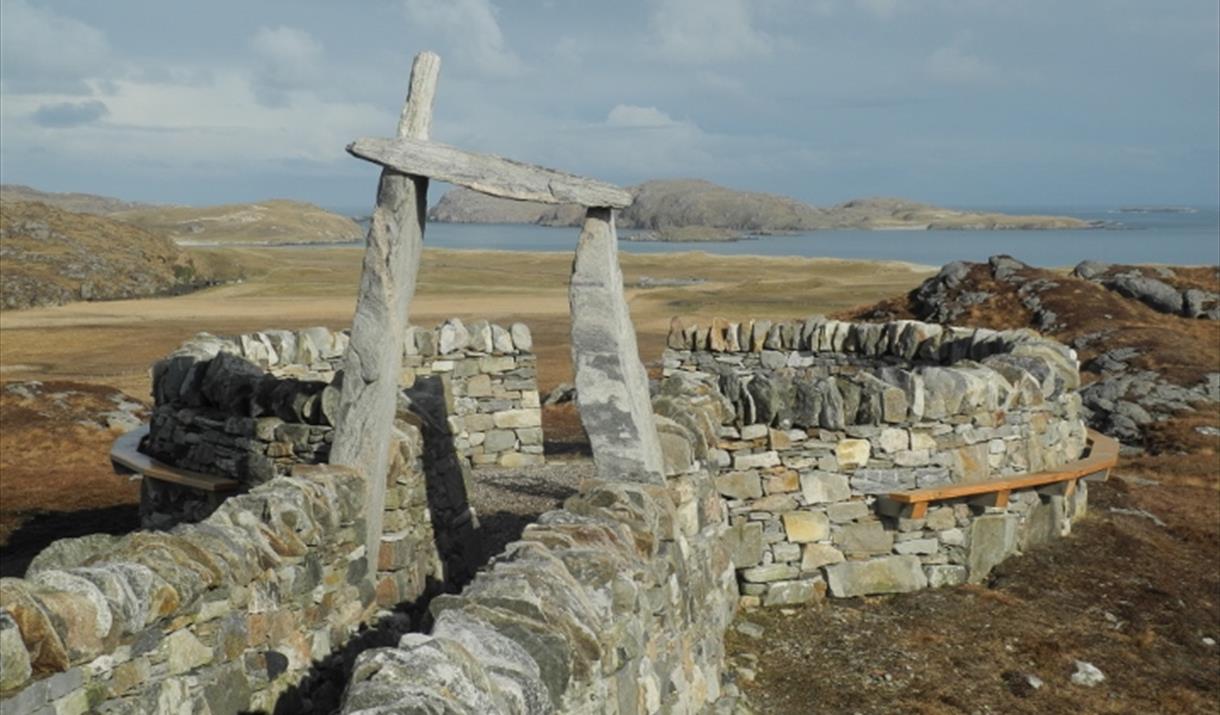 It was decided by the people of the Bhaltos Community in Uig, Isle of Lewis, that a design brief be given to Will Maclean and Marian Leven to create a public work of art that would reflect local, historical events which started in the late 19th century and which are on-going into the 21st century.   The Bhaltos Community Trust asked for a structure which would reflec

3. Changes in Scottish Land Reform and community ownership of the Bhaltos Peninsula.

It had to act as a view point, a visitor attraction with bi-lingual interpretation and provide a focus for local, cultural and educational events.  It was also agreed that the design should be a celebration of island craftsmanship.

The concept of the structure was first considered from the geography of the specific site which had been identified in Reef. Access to this panoramic vantage point is by a pathway from the road with adequate parking for a couple of vehicles.  The easterly aspect has a view towards the village of Reef and the westerly view is to Pabbay Mor.  It was important to link these two identified areas within the plateau, both in terms of the landscape and as a symbolic pathway between the past and the future.  The land around Reef is defined by stone walls, skilfully built and of a distinctive design.  Walls played an important part in the history of the early land raids.

In this centenary year of the land raids by the Reef Raiders, An Sùileachan has been completed with a structure of stone walls, which follow the contours of the land and define two circles connected by a walled walkway or passage.  The east circle has as its centre, a circle of grey granite with the names of the land raiders inscribed on it.  The walkway leading to the west circle passes through a stone arch creating a link from the past to the future. The larger western circle has at its centre a millstone with an iron fire basket mounted on it, which will be lit at times of celebration and commemoration.  The stone walls in this circle have integrated seating inside and outside, allowing for shelter and appreciation of the surrounding environment.  Two openings in the walls are symbolic of the gaps made in the walls by the land raiders and allow access to the view and the outside world. This work of public art has been named in Gaelic, ‘An Sùileachan’, which orbits around the word ‘sùil’ – the Gaelic word for ‘eye’ - but which extrapolates out to ‘eye-opener’ and ‘noteworthy’ and even ‘prescient’ and ‘far-seeing’  and looks as much to the future as to the past.  An Sùileachan melds intimately with our landscape, stitting on a panoramic area overlooking ancient archaeological sites giving us glimpses of our past, sweeping over a crofting landscape with lazy beds and ruined blackhouses and over to West Loch Roag with modern sea harvesting, as well as prawn boats, cruises to remote St Kilda and sea safaris.

Our remote community has a rich Gaelic language and culture and an ancient history and archaeology. We have brochs and wheelhouses, Norse Mills and Viking graves as well as the scattered ruins of blackhouse communities.  The completion of this project has given our community its own unique identity within the Outer Hebrides as well as melding us with similar Hebridean communities which were involved previously in Cuimhneachain nan Gaisgeach.  An Sùileachan encompasses different aspects of our history – the clearances, the land raids and the bringing of the land into community ownership. Visitors to An Sùileachan will learn about the impact of land ownership on our community and understand the importance of working together to improve the future for the people of all ages who live and work here in the 21st century. This particular project has brought together craftsmen from Lewis who have used their knowledge and expertise to create a beautiful work of art, using local materials wherever possible.  Stones for the walls were given by local crofters and a stonemason whose family came from Uig created the walls. The wood came from old trees in the grounds of the castle in Stornoway and a local woodworker made the seating.  The brazier was forged by our blacksmith in Stornoway from old graveyard railings and the stones for the archway were discovered around the low water mark on Vuia Beag, an island in West Loch Roag close to the Bhaltos Peninsula. They were skilfully put together by a local historian and stonemason.  The mill stone was donated as a further link with Uig’s historic past. The materials used to build An Sùileachan have their own particular story which adds to the uniqueness of its concept and design.

The project has also brought together a large number of people in our community who gave freely of their time and enthusiasm to make the project viable.  The archives in the local museum enabled us to put together an exhibition of Bhaltos life past and present, with thoughts on island life from our school pupils in Uig Primary, and interviews with older people of the Bhaltos Peninsula who had stories of being raised in blackhouses and had vivid memories of the hardships of early crofting life. This information was displayed at a ceilidh to raise awareness about An Sùileachan. Such was the interest that we had guests from across the Hebrides and from the mainland coming to share the evening. They were entertained by local musicians and storytellers. Another celebratory ceilidh is being planned to dedicate An Sùileachan to the whole community.  The project has been used by students from Sabhal Mor Ostaig and MacTV has filmed aspects of the build for transmission on BBC Alba. A Bhaltos Community Tweed has been designed for the opening ceremony.  From its inception, this has been a project with community involvement and commitment.  An Sùileachan will provide the people who visit it with a shelter and a sanctuary, a place of contemplation and inspiration and a gathering place where they can come together for commemoration and celebration. “It is a commemorative piece of public art which will remain in perpetuity in our landscape and become a part of the social history, folklore and visual culture of our area and be enjoyed for many generations to come.” Donnie Munro, formerly of  Runrig