You are here: Home > See and Do > Peter May Trilogy - Whistler's House Ardroil 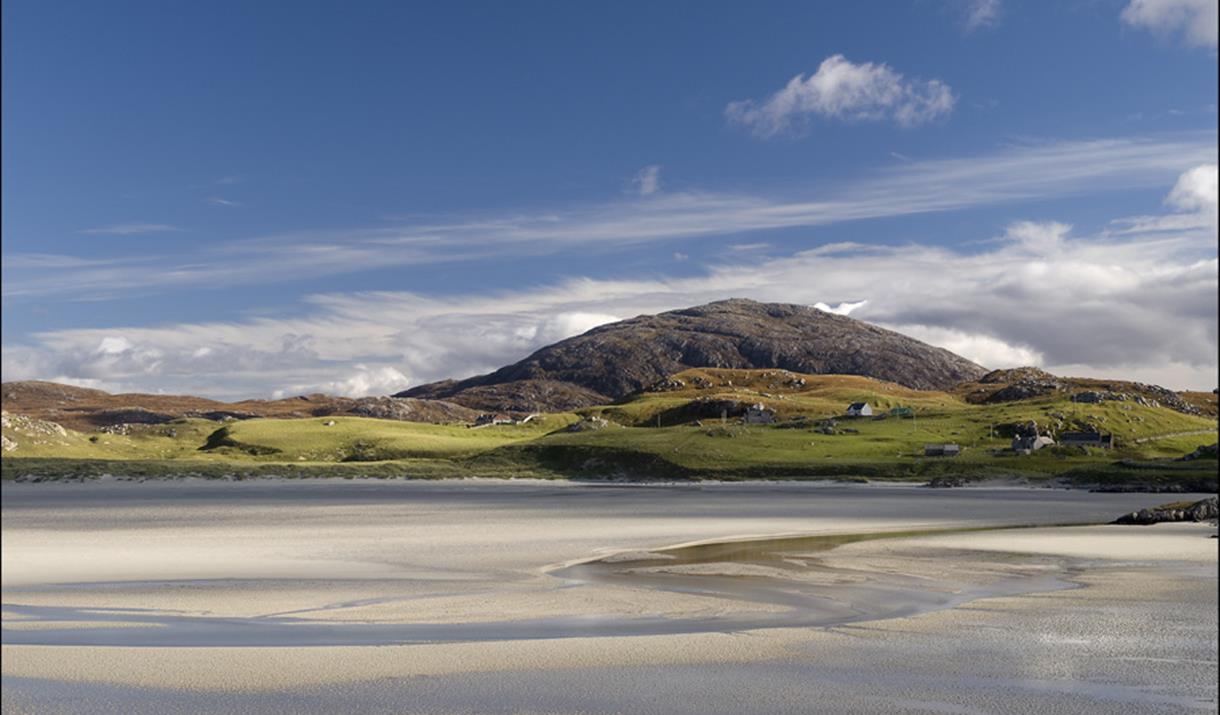 
The glorious bay at Uig, south west Lewis, has many of Fin’s locations around it. Whistler lives at Ardroil as does Minto and the ancient little graveyard at Baile na Cille must be one of the most scenic in Britain.

The Chessmen sees Fin in contact with his old friend Whistler. Whistler played in a band, whilst Fin was the roadie, through his teenage and university years. Whistler is a genius verging on madness and leads a bohemian lifestyle living in an old blackhouse. Peter May imagined his house to be at Ardroil.

Overlooking the bay are the mountains, including Mealaisbhal, where Fin and Whistler have several scrapes.

"Whislter's croft sat up off the road, not far from the cemetery at Ardroil, a steep strip of land rising to a restored blackhouse with views over the dunes and the vast expanse of Uig beach and beyond. There were a handful of sheep grazing on the lower slope, and nearer the house itself old lazy beds had be reactivated to grow potatoes, rows of turned earth fertilized by layers of seaweed cut from the rocks and dragged up the hill."

A great trip to take is by boat with Seatrek at Miavaig, to the islands and literally into the caves where the fatal scene occurs in “Chessmen”.

The famous Lewis Chessmen were found here in 1831. The 78 piece set, made from walrus ivory, were from the 12th Century. Some are displayed at the British Museum in London and some at the Museum of Scotland, Edinurgh.

For the more adventurous, why not try a walk up Suaineabhal, for some spectacular views over Uig bay and over to the hills and lochs of UIg, where you can imagine Fin and Whistler finding the remains of a small plane. Click here for the route.

Abhain Dearg Distillery is nearby and not to be missed. You will get a tour of the distillery, with a dram or two .... just a taster!