You are here: Home > See and Do > Hebridean Way Cycling Route Section B: Daliburgh (South Uist) to Clachan (North Uist) 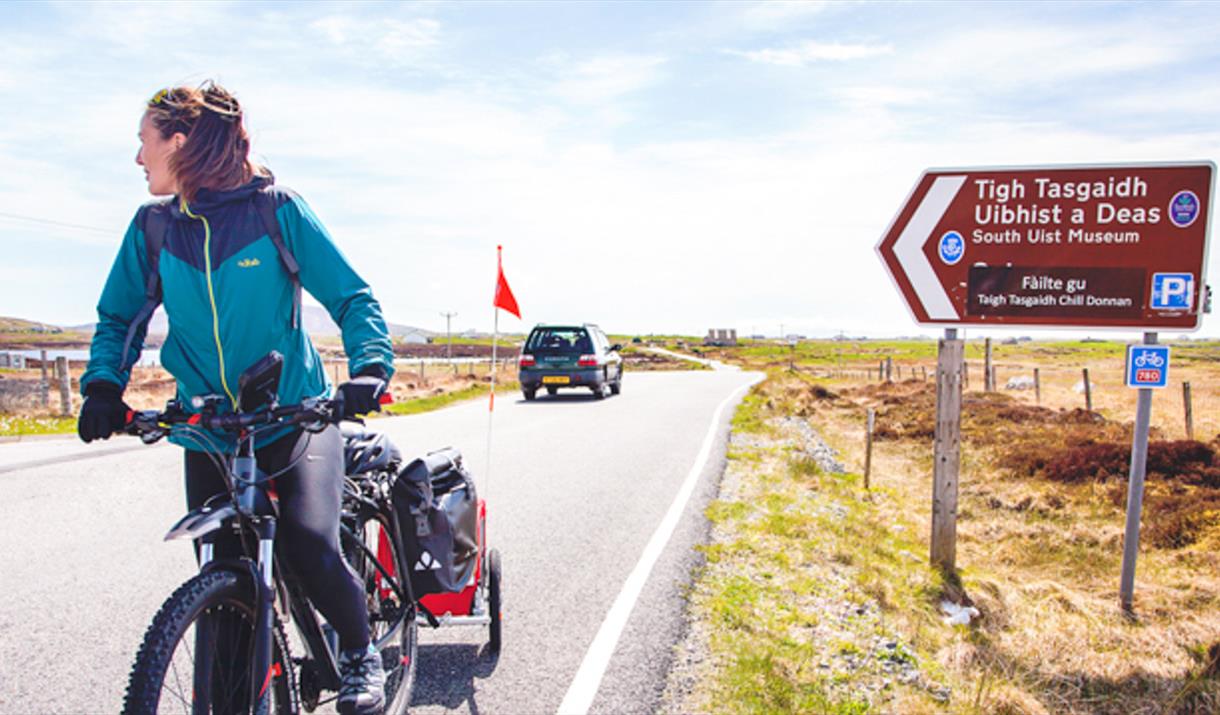 Just north of Daliburgh, look out for the birthplace of Flora MacDonald – the woman who famously helped Bonnie Prince Charlie evade capture  and the nearby museum of the South Uist Historical Society, which has a collection of local archaeological and historical artefacts - and perhaps more importantly, a cafe. Soon the route again loops out onto the machair, passing the ruins of Ormiclate Castle.

Back on the main road, the route heads north through the watery landscape of South Uist including a wonderful stretch of causeway across the vast expanse of Loch Bee, which is home to one of the largest congregations of mute swans in Scotland. Just before you get the causeway to Benbecula, there is the Salar Smokehouse about a mile or so down the road to the right and just up on the left, about a mile through the village of Iochdar is the Hebridean Jewellery Cafe overlooking the beach.

In Gaelic, Benbecula means the ‘mountain of the ford’ and it's solitary hill, Rueval, is not exactly high. Once, crossing to the Uists meant fording the dangerous stretches of sands at low tide, but today the islands are connected by a series of causeways.

Balivanich is the main administrative centre of this busy island, whose population is boosted by people who service the nearby missile testing range. Lovats Supermarket and Stepping Stones cafe, as well as a bank, takeaway and MacGillivrary's Pit Stop gift and information shop can all be found here and nearby Charlies Bistro. But away from the main centre, there is plenty to see. Immediately after the causeway across South Ford there is a supermarket and the Isle of Benbecula House hotel – and soon after the turn for Balivanich, a museum and the Dark Island Hotel, before you reach the machair and some fine beaches that are close to the road. The deeply incut beach at Culla provides good shelter from any wind and feels isolated despite being close to the main centre of population.

If you want to visit the rugged east coast with its many sea lochs, turn right after the first section of the causeway across the North Ford and ride the 5 mile (9km) circuit around Grimsay. It is not strictly on The Hebridean Way Cycling Route, but it is well worth making a detour to visit the busy little harbour at Kallin, at the eastern end of the island, which is an important fishing base for shellfish. Uist Wool is a great stop off and the Boatshed, a marine repair facility, promotes traditional boat-building skills and has a small museum. There are also a couple of cafes.

Carnish at the southern tip of North Uist has you will find the Temple View Hotel, with a view of ruins of Teampall na Trianaid, an important pre-Reformation church and site of learning that predates any of the more famous Scottish universities.  As you cycle northwards towards Clachan, look out across the flat tidal island of Baleshare to see the Monach Islands, which was home to a sizable population in the 18th century but have been uninhabited since 1942.