You are here: Home > See and Do > Kilpheder (Cille Pheadair) Wheelhouse 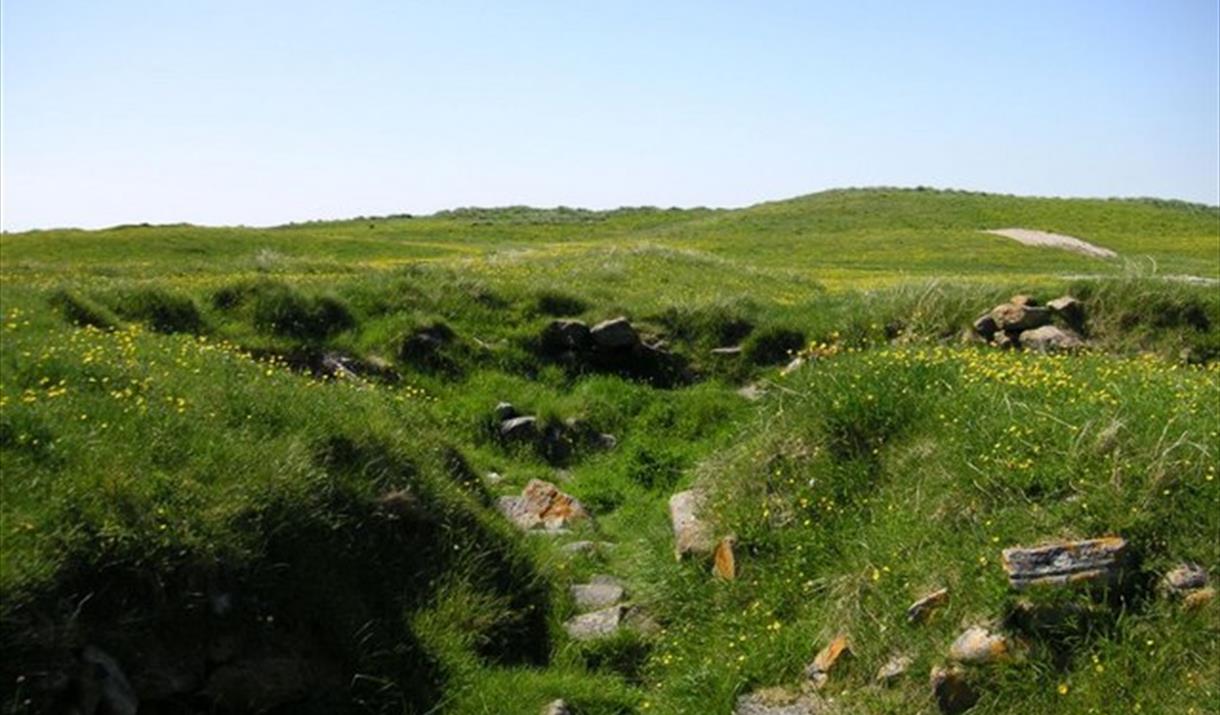 It had an internal diameter of 8.8 metres, and contained 11 radial piers. Finds included abundant pottery, stone, bone and antler implements, including slate pot lids, bone spoons, rotary querns and a Romano-British enamelled bronze brooch, one of the few Roman artefacts to have appeared in the Outer Hebrides, which was probably left behind on a ledge when the building was abandoned about 200 AD. There is now little to be seen of the wheelhouse at Cille Pheadair.

In 1998, archaeologists from Sheffield University found an unusual square burial cairn being eroded by the sea on the beach at Cille Pheadair in South Uist. After excavation, it was reconstructed in the grounds of Kildonan Museum in July 2003, where it can be seen today. It was built out of a kerb of vertical slabs enclosing sand and stones, covered by a capping of beach pebbles. This cairn had been erected on top of a grave about 2 metres long and 0.6 metres made from vertical stones and covering slabs.

Inside the grave were bones of a woman aged about 40. There were no grave goods in the burial except for a pebble below her waist. She was buried around AD 700, the time of the Pictish Kingdoms in Eastern and Northern Scotland. Her burial cairn is one of a small group known in the Uists and Barra, but its closest comparison is with tombs in Shetland. It originally had four corner posts but three of these were removed in the distant past.

'Kilpheder Kate', as she has become known, suffered from arthritis in her spine, right thumb and jaw. Her teeth were very worn, probably from grit in the bread, from milling with coarse grinding stones. Curiously, her diet included very little seafood or fish. Burials like this are rare in Western Scotland and she may have been a special or important person. She or her mourners probably had connections with the Pictish kingdoms, probably the Northern Isles rather than Eastern Scotland.

There is evidence that Kate's death was as eventful as her life. Although there are no indications as to how she died, before the cairn was built on the top. someone removed her sternum (breastbone), lifted her hand from her chest and moved it to her side and twisted the body on its side. We know that the hand was moved because the body was so rotted that many of the hand bones became detached and remained on her chest.

Nobody knows whether these strange acts were part of a ritual, a violent desecration, or a means of putting her ghost to rest. Only future discoveries will help us to understand her enigmatic treatment.

Where did Kate come from? There are many Pictish-period settlements in South Uist and she may have lived on one of these. Analysis of isotope levels preserved in the woman's teeth showed that she was indeed an incomer.