You are here: Home > See and Do > Peter May Trilogy - MacNeil's Bar and The Narrows

Peter May Trilogy - MacNeil's Bar and The Narrows 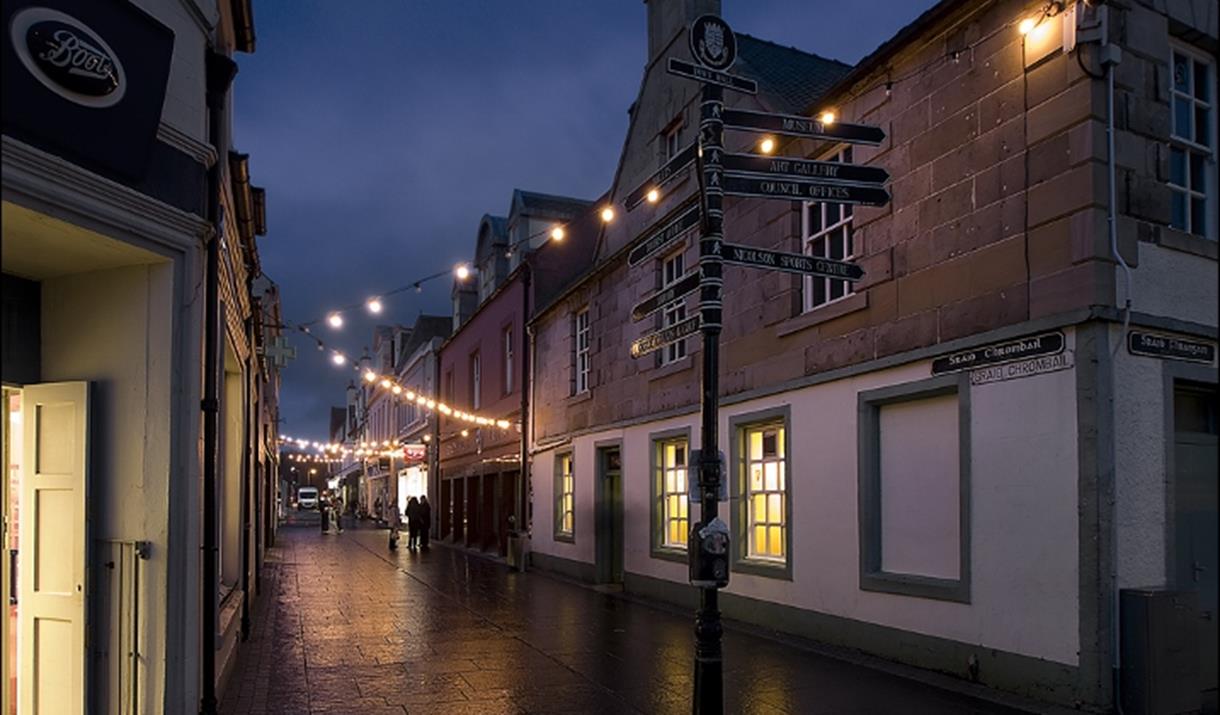 In The Blackhouse, MacNeil's bar on the corner of Cromwell Street and Francis Street was the scene of a fight between Fin and Murdo Ruadh, the brother of the murder victim, who had made Fin's childhood a misery. The fight spills out of the bar on to the street, which are known as The Narrows.

"There was uproar in the pub, and a single, high-pitched voice rose above all the others, shrill and commanding. A womans voice. 'Get out! The lot of you, before I call the police.'

'They're here already,' some joker quipped, and those who knew Fin, laughed.

The manageress was a lady in her middle years, not unattracive, soft blond curls around an elfin face. But she had been in this game a few years and knew how to handle men with a drink in them. She rapped a stout wooden stick on top of the bar 'Out! Now!' And no one was going to argue with her.

Several dozen men spilled out into the Narrows. The street was deserted. Rain lay in pools and puddles under streetlamps that barely cut the twilight gloom. Gigs still had Fin by the arm, and the guga hunters crowded around to hustle him away towards the quay. Murdo's voice roared above the howl of the wind................"

Extract from The Blackhouse by Peter May

MacNeil's is a great place for a wee dram and chat with the friendly locals. On a Thursday night there is an open mic night and on a Friday and Saturday night there is usually live music. Most bars will have some live music playing at the weekends, and its is worth checking out the nightlife in Stornoway!

Stornoway town centre is a hub of activity. There are bars, shops, restaurants, cafes, takeaways, an art gallery and the Tourist Information Centre. In the summer months there are often markets in Perceval Square in the town centre.

The nearby Lews Castle grounds is perfect for a walk or cycle. There is a wide range of different paths leading off the main route to explore and a stunning vista of Stornoway from the top of Gallows hill.  You could also try out Segway Hebrides tours, a unique way of exploring the Castle Grounds and to  finish of your walk, cycle or tour you can pop into the Woodlands Centre for a cuppa!

The Iolaire monument which is refered to in The Chessmen, has such an evocative story. On New Years Day 1919, the Iolaire was returning soilders from the First World War back to Lewis, when it struck the rocks within the sights of Stonoway. Over 200 men lost there lives on that fateful night.

Click here to go back to the Peter May Trilogy home page.