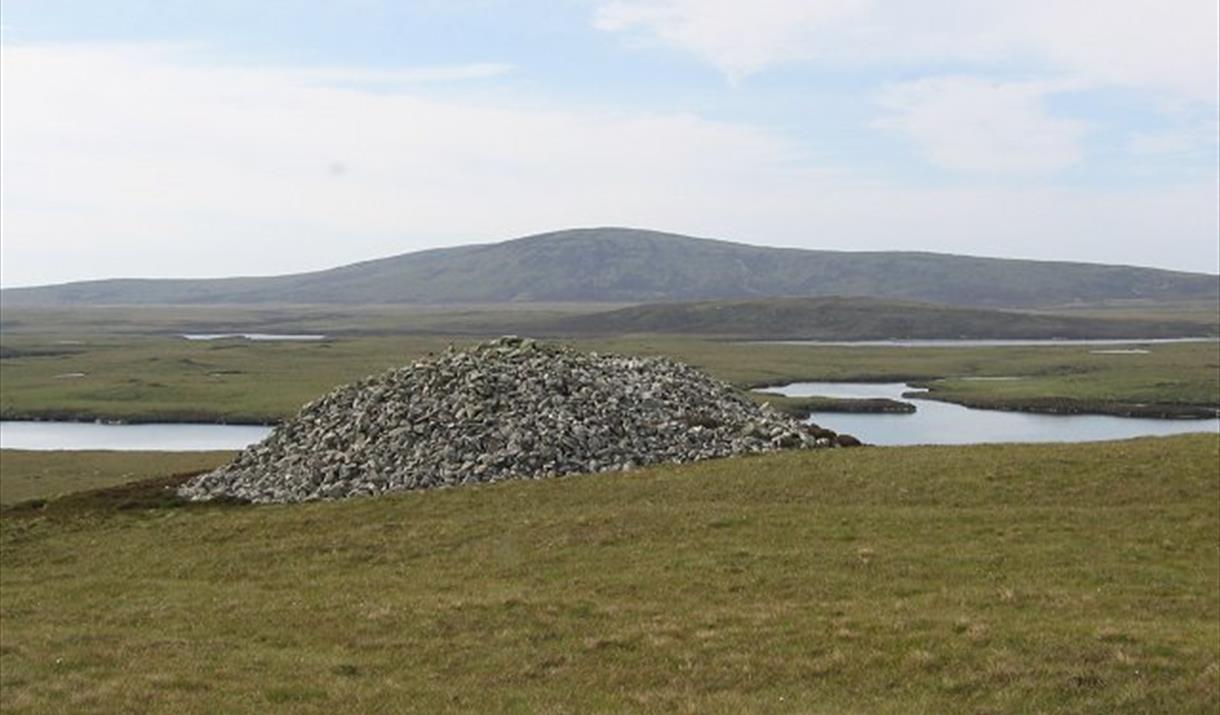 Barpa Langais is the best preserved Neolithic chambered cairn in the Outer Hebrides. It is typical of tombs built all over the islands by Neolithic farming communities, in this case about 25 metres in diameter, and containing a great mass of stone which would have dominated the surrounding landscape, with a relatively small burial chamber inside. It probably served as a communal tribal resting place, not just for a single leader. Many such tombs have passages which face midwinter sunrise or sunset, but the entrance at Langais faces just south of east.

Barpa Langais has never been investigated by modern archaeologists, but more than a century ago, pottery, charcoal and cremated human bones were found scattered on the floor; fragments of Beaker pottery there indicated that the tomb may have continued in use for a thousand years. During that time the Barpa Langais cairn must have remained as a ritual and ceremonial focus for the local community. They lived by rearing cattle and sheep and growing early forms of wheat and barley, so the fertility of the soil and the clemency of the weather were of fundamental importance to them. The physical world they inhabited, with its widespread woodland before the landscape changes with the spreading of blanket peat, was very different from today's islands, but so was their spiritual world, and great monuments like Barpa Langais, the resting place of the tribal ancestors, must have been of central importance to them.

In 2006, archaeological work before road widening located traces of earlier occupation, some of the earliest evidence for human activity in the Outer Hebrides so far. In the Mesolithic period, a small band of hunters and gatherers set up seasonal camp here on the slopes of Langais. They built shelters which left traces of small post-holes in the ground, and lit fires, the ashes of which survived to this day under the engulfing peat. Small flakes of quartz and other stone types showed that tools were being manufactured on the site: one of the "anvil" stones used was found still in position after 6,000 years.

In time, these harvesters of the island's wild resources began to take their first steps to becoming farmers. Adopting a more settled lifestyle meant that new luxuries like pottery became possible, and the discovery of a small decorated vessel on the site demonstrates the transition to a Neolithic culture.

There is a car park near Barpa Langass and a footpath up to the burial chamber itself, enabling it to be viewed from the outside.