You are here: Home > See and Do > St Clements Church (Tur Chliamainn) 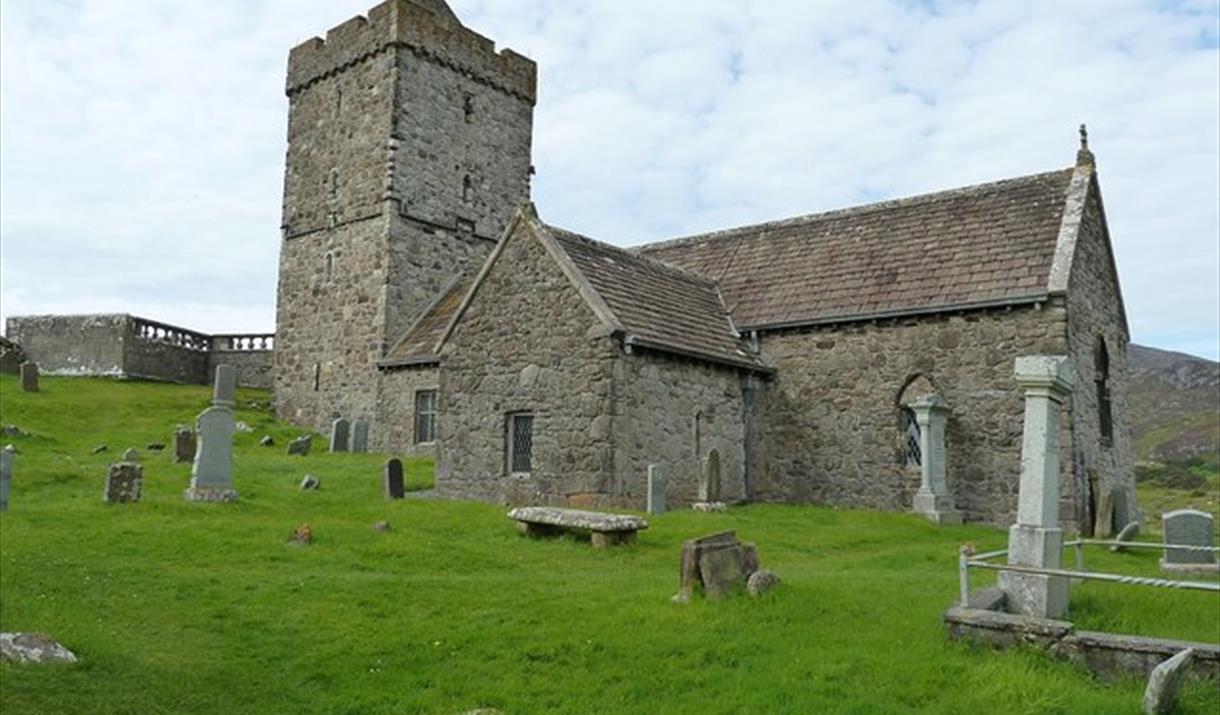 It has the finest collection of late medieval carvings in the Outer Hebrides, ranging from architectural details such as the intriguing sheela-na-gigs to the carved graveslabs and tombs, most notably the exquisite tomb of the church's founder, Alexander Macleod of Harris and Dunvegan, of AD 1528.

The present church was probably built in the 1520s and 1530s, although there is a tradition that it is on the site of an earlier monastery. St Clements may have been founded as a collegiate church, where a group of clerics were maintained to pray for the soul of its founder, rather than principally to serve a parish. It was short-lived, however, falling out of use after the Reformation, and becoming derelict.

It went through a series of restorations by successive owners of Harris, lastly in 1873 by the dowager Countess of Dunmore. It is now in the care of Historic Scotland. The graveyard, however, continued in use, and contains a number of interesting enclosures.

The church is of cruciform plan with two two transepts and a tower at its west end. The tower, entered through the west wall of the nave by an intramural staircase, rises through four storeys. Externally, the tower has is set with sculpted panels including the extraordinary exhibitionist figures of a type found on Irish churches and on the Augustinian nunnery of Iona.

The 1528 tomb of Alexander Macleod is one of the finest examples in Scotland. Set in a recessed semicircular arch, with panels of figures displaying the evangelists, apostles and angels, with God the Father and the crucified Saviour at its centre. Within are representations of the Virgin Mary with two bishops (including St Clement with skull), and below these, an earthly hunting scene with dogs and stags, and the weighing of the souls of the dead. A stone effigy of Alexander dressed in armour lies on the cist beneath.

Other sculpture includes the top of a high cross with roundel showing the crucifixion on one side, which must have stood near the entrance to the churchyard in the later middle ages.

To the east of the church, on a low hill on the opposite side of the road are the remains of Roghadall Dun (NG 0508 8320). The walls of this circular dun are 13.5m in diameter with much collapsed stonework, and there appear to have been external structures surrounding the dun's north-west side. This site provided an great vantage point covering the horizon from Skye to North Uist.