You are here: Home > See and Do > Howmore (Tobha Mhor) Ancient Chapels 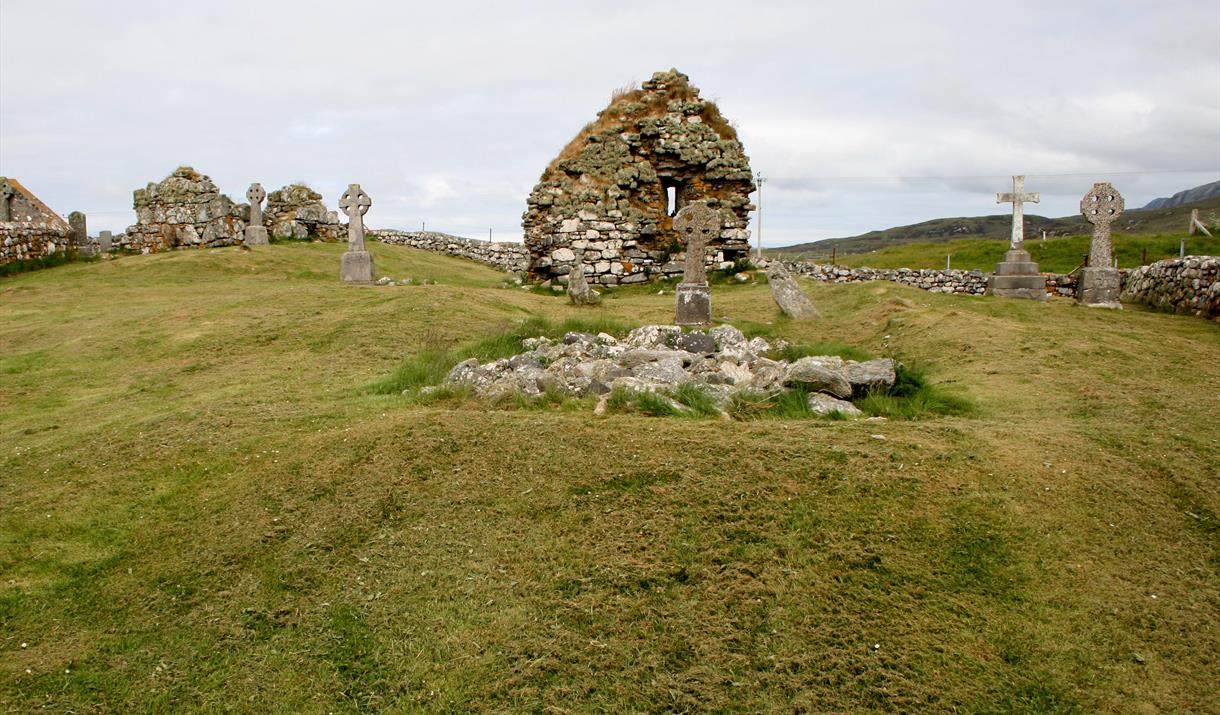 Monastic houses based on Irish prototypes spread throughout the west of Scotland from the 6th century onwards. Towards the end of the Norse period (9th - 13th century) a parish system was established in the islands, and from 1200 AD parish churches became more widespread. Many of them fell into disuse after the 16th century.

We do not know when the first chapel was built at Tobha Mòr, but a stone slab incised with a outlined cross may suggest a Christian presence here before the 9th century.

Later, a series of chapels and parish churches were built, and the remains of four of them can be seen today. The earliest may be no earlier than c. 1200 AD, but their character is reminiscent of early Irish Celtic monastic sites. The name Tobha comes from an Old Norse word meaning mound, and may refer to the artificial mound below Caibeal Chlann 'ic Ailein.

The remains of four or five churches and chapels survive at Tobha Mòr:

1. Caibeal Dubhail (Dugall's Chapel). A charming, tiny chapel of Irish type which had a steeply-pitched stone roof, and a door with sloping jambs, unusually in the east wall.
2. St Mary's church (Teampall Mòr). This was the parish church of South Uist, probably built in the later 13th century.
3. Caibeal Dhiarmaid (St Dermot's Chapel). This church predated Teampall Mòr, possibly of the earlier 13th century, and appears to have been much altered during its use.
4. Caibeal Chlann 'ic Ailein (Clan Ranald chapel). This occupies the highest (and oldest) ground. Originally a chapel with an eastern doorway similar to Caibeal Dubhail, but
later a nave was added (now lost) with moulded chancel arch of 12th or early 13th century date. John of Moidart (Eoin Muidearach) left funds to rebuild the chapel, in
which he was buried in 1574, incorporating the fine armorial panel now in Kildonan Museum.

Another chapel, Caibeal Colla, was demolished shortly before 1866, now occupied by the burial enclosure Cabeal na Sagairt. Another burial enclosure, Cabeal na Mhinister, was built around 1700 for Flora Macdonald's grandfather.